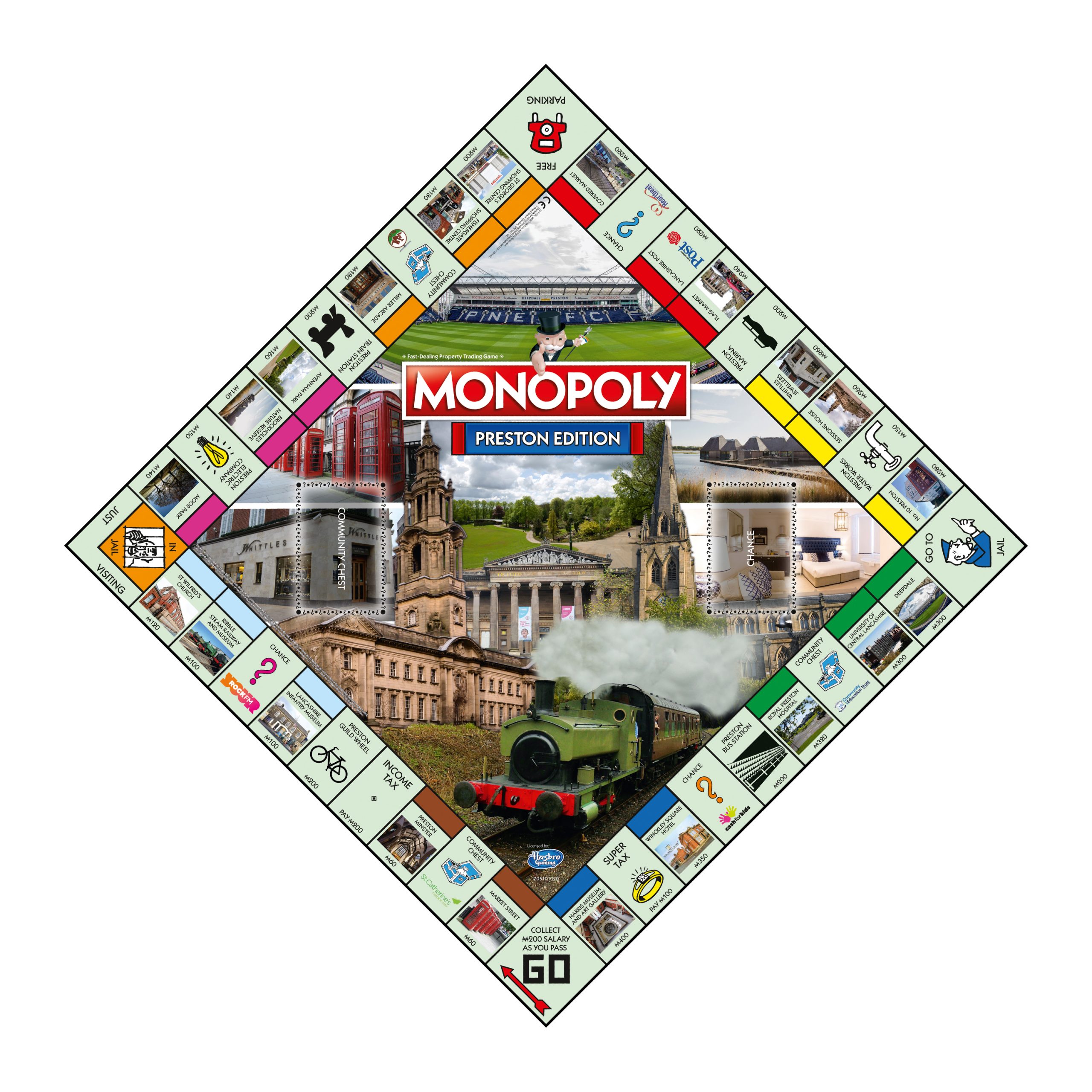 THE PRESTON MONOPOLY ‘BIG REVEAL’…and WE are in the game!

Look: WE get to star on the brand-new MONOPOLY game for Preston!

The much-anticipated board hits the shops this morning at 10am (Thursday 22nd October 2020).

And the ‘Big Reveal’ of the game sees:

The makers of this new Preston version of the world’s most famous board game are proudly describing the new game as:

“A Love Letter to Preston”.

And tourist and civic leaders have been very quick to praise the new game.

“This is a very tough time for Preston and Lancashire so we need all the good news we can get. Preston’s very own MONOPOLY game – highlighting what’s special about the city – is great and just in time for Christmas.”

“Preston is fortunate to be home to many outstanding landmarks, businesses and charities.

“MONOPOLY conjures up lots of great memories for so many people – this we are sure will be the perfect gift for Christmas.”

Andrew Stringer, Centre Manager at St. George’s Shopping Centre commented: “We are delighted to be included on Preston’s very own MONOPOLY game, the game celebrates everything which makes Preston unique… I can’t wait to get my hands on one!”

The board has been produced by Winning Moves UK, under official license from the MONOPOLY brand, owned by Hasbro.

“We feel the game is a Love Letter to Preston. It is also, perhaps, the perfect limited lockdown gift and must-have for Christmas.”

The new edition is now available at stores across Preston including WHSmith, Waterstones, Ryman and The Works – as well as very widely available online, including on Amazon.

Hasbro (NASDAQ: HAS) is a global play and entertainment company committed to Creating the World’s Best Play and Entertainment Experiences. From toys, games and consumer products to television, movies, digital gaming, live action, music, and virtual reality experiences, Hasbro connects to global audiences by bringing to life great innovations, stories and brands across established and inventive platforms.  Hasbro’s iconic brands include NERF, MAGIC: THE GATHERING, MY LITTLE PONY, TRANSFORMERS, PLAY-DOH, MONOPOLY, BABY ALIVE, POWER RANGERS, PEPPA PIG and PJ MASKS, as well as premier partner brands. Through its global entertainment studio eOne, Hasbro is building its brands globally through great storytelling and content on all screens. Hasbro is committed to making the world a better place for children and their families through corporate social responsibility and philanthropy. Hasbro ranked No. 13 on the 2019 100 Best Corporate Citizens list by CR Magazine and has been named one of the World’s Most Ethical Companies® by Ethisphere Institute for the past nine years. We routinely share important business and brand updates on our Investor Relations website, Newsroom and social channels (@Hasbro on Twitter and Instagram.)